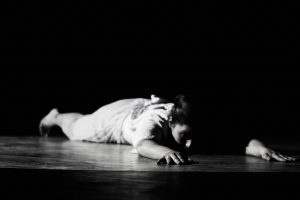 Katie Dale-Everett Dance will be with us this October with her innovative piece Digital Tattoo, just one of the many things we have as part of our Brighton Digital Festival programme. The piece explores the impact of our digital footprint and the fictions and lives we create for our online audience.

We spoke to Katie about the impact of social media and how important it is in 2017. Katie said, “I don’t think we need a digital footprint but I think everyone wants to have an impact on the world.” She went on to say, “I try not to have my data on all the time but that means that I miss messages.”

We spoke about the idea of trying not to use social media, but decided that even if we don’t want to use Facebook, it’s difficult to ignore because it’s the main way people communicate. There are many positives to living in the digital age as well. You can access information and videos without leaving your house, you can find family members you didn’t know you had and you can be at the forefront of world news.

Katie said, “But when it’s gone you realise how much you need it. One of the wires that connected the internet from Eastbourne to near Brighton was disconnected a little while ago and everyones internet was down for three days. I had applications that I needed to get into for the tour so I had to go to the library and it closes early … it was quite refreshing in a way.”

The show – not to give away too much – is an intimate portrayal of two lovers and the unintentional outcomes of their digital tattoos.

Katie described a little of what to expect and said, “At one point people without Twitter go in the centre and people who do stand around the edges. They upload a photo of those in the centre to Twitter, to show that even though you might not choose to opt in it is still there.”

We also spoke about the permanence of a digital footprint. Katie said, “I look at Judi Dench and wonder what it’s like to see your life through the films you’ve made, to watch yourself age, it’s kind of amazing but must be confronting.”

Digital Tattoo is on Tuesday 10 October at 8pm.

A film by Katie Dale-Everett Dance also will be in our cafe-bar from 2-10 October – see it on the night or during another visit during the time period.