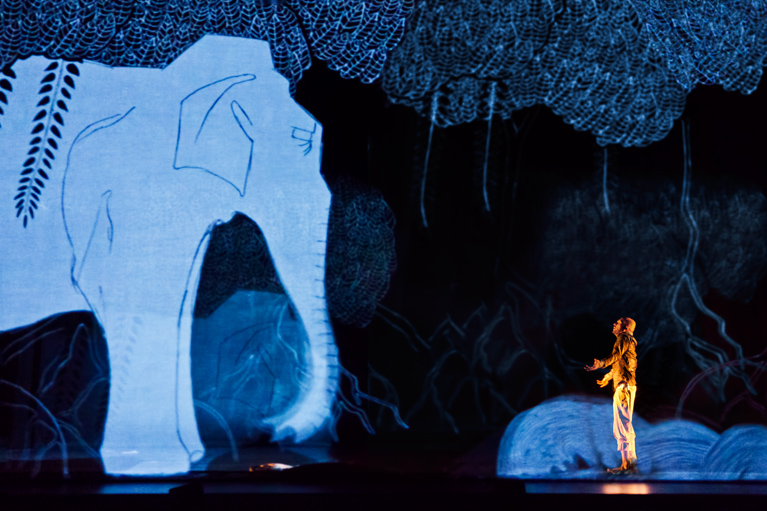 Can an adult enjoy a show made for kids? By Katie Dale-Everett

Can an adult enjoy a show made for kids? If it is ‘Chotto Desh’ presented by Akram Khan Company and MOKO Dance then the answer is most probably yes. Joining together text, animation, dance and props, the adapted version of Khan’s ‘DESH’ (2011), takes its audience on a magical journey, escaping reality and transporting them to a range of countries and imaginary worlds.

Starting suddenly, the work draws you in from the first exaggerated and animated movements, as Akram asks a phone call centre company how he can fix his phone. Answered by a wise child, who directs the questions to be more about life and connection, children and adults alike can relate on their own level to the conversation and its meaning. Made up of multiple sections which incorporate props, a cleverly designed lighting plot and musical score and text, throughout ‘Chotto Desh’ (which means ‘small homeland’), we see young Akram struggle with finding his identity, shaped by his two ‘homelands’ with very different cultures: London and Bangladesh.

What I think is really inspiring for children is the proficiency of Khan as a performer and the choreographic constructs throughout the work to create more characters beyond Khan’s solo self, acting as a wonderful introduction to contemporary dance. Throughout, characters are either created through recorded voice, in which live Akram has conversations or through visual transformation, showing Akram’s mastery of movement and characterisation. One particularly poignant section was the moment that Khan transformed into his dad, drawing a face on top of his head and creating an almost puppet like characterisation, through gestural movements and fluid movements of the head.

Another mesmerising  moment and probably the most recognised moment in the piece is when Akram’s mother begins to tell him a traditional childhood story and the stage becomes transformed into a moving jungle through projected animation. Khan’s precision and true dedication to character at this moment, makes us feel as if he is transversing space beyond the limitations of the proscenium theatre and creates a true sense of magic.

Overall, I believe that ‘Choto Desh’ is a show to be enjoyed by both adults and children, a must see for all the family. For me, it was a true adventure and wonderful experience, which one can only imagine how magical it must have been for a child’s mind, not yet limited by the realities of life.