Lou Cope – Postcards From The Outside Of The Inside 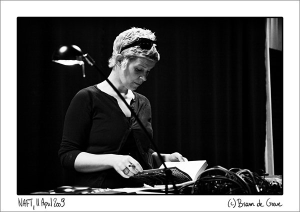 Well, I guess the beginning has begun!

I’ve made my first steps into the world of South East Dance and all the artists they support.

Introductions have been made, hopes have been shared and the initial questions that start any process I work on have been asked.

As a dramaturg, it’s always an odd moment, stepping from the outside to the inside; going from being strangers to being creatively intimate. But people are normally so open, willing and up for it – how can we go wrong?!

So far this Summer, I’ve spent time in the world of artists Katie Dale-Everett and Dan Daw, both of whom are busy preparing new works.

Katie is currently creating a new piece of work. We had a great session, my brain was fried on more than one occasion, and I really enjoyed working with her to figure out what’s most important in what she’s saying and then – how the hell she’s going to do it technically. Exploring the dramaturgy of her work was fascinating. As is often the way I was blown away by the choices artists face, and the profound difference even the smallest decision can make to a piece and how it is received.

I also stepped briefly and virtually into Dan Daw’s world. Dan is busy touring his new piece ‘Beast’ as well as developing a Symposium called ‘Get Better Soon’, which will be hosted in Brighton, this November. Exciting times for Dan (who received the BBC Performing Arts Fund and is an Associate Artist of SED) and I can’t wait to get stuck in to working with him.

In addition to working with artists, I have also begun work as dramaturg to South East Dance, which is rather marvellous if a little daunting. I’ve embarked upon a series of meetings and creative thinking sessions with all the staff – as individuals, as departments and as a whole. So far I’ve had the following feelings: a) I want to do this forever b) I want to run for the hills and c) what a strange and wonderful honour this is. Deep and complicated and inspiring and exciting.

Well, enough about the fun I’m having! Here’s how you all get to join in …

Plans for the various schemes that form this residency have been finalised, and – well here they are…

TEST – is a 2 day workshop plus follow up skype support for 6 choreographers, and two emerging dramaturgs, to explore the value of embracing dramaturgical practice. Apply here

COLLABORATE – is an open access investment pot for anyone who wants to work with a dramaturg, whether that’s me or someone else. Apply here

Or could you just like me, in person, and I’ll tell you…

That’s it for now. More when things hot up in the Autumn!

Katie will also be working with Lou on an additional new live work ‘Digital Tattoo’ later in the year. This will be performed at The Basement Brighton in November 2015: