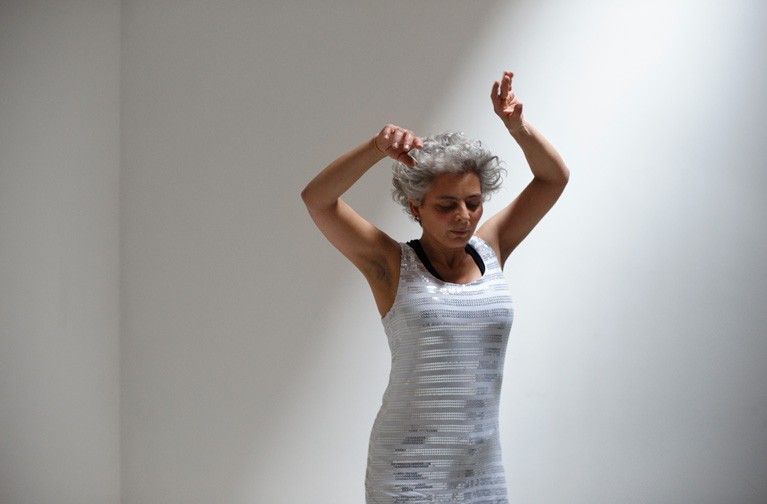 What do you expect when you are told that you are going to see a work called ‘Pact with Pointlessness’? A random assortment of comical nonsense? Clowning on stage? A work which will be enjoyable in the moment but forgotten later? Insert movement artist Wendy Houston into the mix and you receive an intelligently thought through and powerful work throughout which you will be laughing out loud in one moment and then reflecting upon your own life in the next.

Starting with the drawn out choreographed movement of over the top coloured lights, projection of the words ‘Pact with Pointlessness’ and funfair music, the audience is immediately hit with a sense of futility. Entering the stage wearing black tracksuits and a t-shirt, Houstoun continues this theme by running around a microphone stand multiple times and it is refreshing to see an older, female dancer holding the stage alone. Taking her audience on a journey of reflection, we witness not only dance but poetry, film projection, quotes and comedy, each episodic section able to stand alone within its own right, but together creating a constant sense of moving forward, something which Houstoun suggests is the only thing we can do in this pointless world which is taking us further and further towards our death.

Within the final scene, Houstoun’s recognition of the pointlessness of a life in which we are constantly trying to ‘keep everything up in the air’ hits strongly home as she reduces humanity to different parts of the human body. It could be argued that she even reduces her own art form, a form in which she says offers her the chance to be in a constant state of rediscovery through repetition is pointless as it is a construction that will only ever be ephemeral.

Although I had heard of Houstoun many times before, I had never been fortunate enough to attend her work. As an artist I found her performance committed and invested; the audience knowing that of course she is performing a repetition of something which she has done many times before, yet her performance still maintains the ‘innocence of the first act’ (Trisha Brown).

Contrary to the theme of pointlessness running throughout the evenings work, ‘Pact with Pointlessness’ is an important piece of work made to celebrate Houstoun’s long standing as an important figure within contemporary performance. Taking up the position of South East Dance’s ‘Established Artist Fellow’, for this year, the work forms part of the celebration of Houstoun’s thirty five years as an established movement/theatre maker within contemporary theatre.

To conclude, for me this work is a must see not only for those interested in dance, but a work to be seen by comedy lovers, theatre makers and poetry artists. So in answer to the question is this work pointless? I would argue not at all, in fact I think it stands as a highly regarded work, which I will continue to think about for a long while yet.